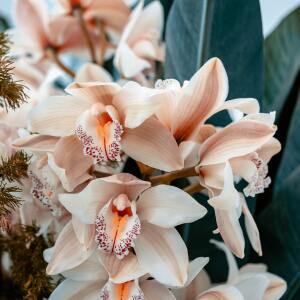 Ellen was the last matriarch of her generation. She was born in Pueblo, Colorado on November 5, 1931. She was the third and youngest of three girls born to Clarence and Edna Hess. She grew up in San Jose with her two older sisters, Charlotte and Maryanne. The three girls were very close throughout their lives and Ellen was connected to them as long as they were alive. She talked of all her family with fond memories. Ellen had a happy childhood and talked about the trips on the train she took to visit extended family in Omaha, Nebraska. Ellen also had many close friends from childhood and stayed in touch by phone with her life long friend, Louise.

Ellen was also a life long, devout Catholic. She attended Catholic schools and graduated from Notre Dame High School in 1949. Her only employment was in a local bank after her graduation.

Then Ellen met the love of her life John Henry LaBonte. She said it was love at first sight when she saw him in his Navy uniform. They were married on April 30, 1955. He had been stationed in Alaska a year before their wedding and Ellen loved to tell the story of how she waited for him and collected things for their new home when he returned. She saved all the love letters he wrote her during that time.

Ellen waited 9 years for the birth of her first child, Jacqueline Ann LaBonte born January 25, 1964. Her second child, John William LaBonte was born on May 6, 1967.

Ellen spent her life as a homemaker, wife and mother. She was committed to all her family throughout her life. She also welcomed her one grandchild, Andy LaBonte on June 4, 2000.

Ellen will be remembered as a gentle woman who loved animals and the little joys in life. She loved jewelry and shopping, getting dressed up and going out to eat. She had many good times with her husband going out to lunch and having a glass of wine. She also enjoyed visiting the family cabin in Willow Creek and sitting by the pool.

Ellen was generous to a fault and would give anything she had to someone in need. She donated to several charities during her life. She loved causes that supported animals or children in need. Her generous spirit will be missed.

Ellen had a strong faith in the Lord Jesus Christ and leaned on His strength during life’s challenges. She surrounded herself with prayer cards and pictures of angels.

Thank you to the nurses and doctors who cared for her at Saint Joseph Hospital during the end of her life and the kind staff at Hospice of Humboldt that was there at the end.

She is preceded in death by her parents, Edna and Clarence Hess, her sisters Charlotte Towne and Maryanne Doutt and her husband John LaBonte.

There will be a Mass and service held at Sacred Heart Church on May 13 at 11 a.m.

To send flowers to the family or plant a tree in memory of Ellen, please visit our floral store.