Plant a tree in memory of Maxine
An environmentally-friendly option 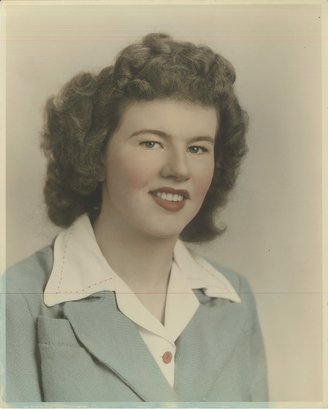 Maxine M. Maples (Friesen) passed into the loving arms of her Savior on Saturday, April 24. Maxine was 94, born on February 27, 1927, in Dallas, Oregon, into a family of German descent. Maxine was one of 9 children. While her parents Jacob and Katherina preferred the German language, Maxine and her siblings were encouraged to speak only English, reflective of that era. In her 16th year the family moved to Medford, where Maxine graduated from Medford High School in 1945. Soon after, she moved to San Francisco where she found work as a secretarial clerk. Playland in San Francisco was a favorite destination for Maxine, where she enjoyed the roller coaster. At Playland, on one Saturday in 1947, Maxine was approached by a young, broke sailor trying to sell a fountain pen, needing the proceeds for cab fare back to his ship in Alameda. That young sailor, Wayne Maples, convinced Maxine to pay for them both to ride the roller coaster. They were married six weeks later, on April 5, 1947, after an all- night drive to Minden, Nevada, where they woke the justice of the peace to perform an early morning ceremony. Thus, beginning a union and journey that would last 74 years.

Upon Wayne’s discharge from the USN he and Maxine located to Tempe, Arizona, to be near Wayne’s parents. Their first of five sons, Michael, was born there in 1948. In 1950, the young family of 3 traveled to visit Maxine’s family who had just relocated to Eureka. At Maxine’s request her and Michael remained in Eureka for a longer visit while Wayne returned to his power company job in Tempe. Just a few days later Maxine received a call from Wayne announcing that the family was moving to Eureka. Permanently. Maxine was overjoyed to be locating near her family. She would forever refer to that phone call as her greatest answer to prayer. Their first home was public housing where what is now Winco.

Over the next 12 years Wayne & Maxine added 4 sons to their home. Bruce in 1951, twins Roger & Rodney in 1954, and Dale in 1962. Maxine, our Mom, had 4 loves. First, Mom’s faith in her Lord and Savior Jesus Christ became the foundation of her whole being. From that, she never wavered. She made sure her five boys, and her husband, knew the path to her Savior. She was an active and faithful member, with Dad, in the Eureka Nazarene Church. There, she sang in the choir, served as missionary president, and made her lifelong friends.

Second only to her love for Jesus, was her endearing affection for her husband and our father, Wayne. In that also, she never wavered. After arriving in Eureka, Wayne was blessed to find work as an apprentice plumber and in 1960, started a plumbing company. He borrowed the seed money for that venture from his mother-in-law. So, it was also Mom’s investment from the beginning. Whatever ups or downs the company experienced, it was Maxine and Wayne pulling together through their hard work ethic. As time went by and travel became possible, they traveled the world; from China to Israel, and from cruises through the Panama Canal to the Alaskan Inside Passage. Mom and Dad were the perfect example of two, being one.

Third, mom loved her boys. Though she longed for a daughter, it was not to be. As we five boys reflect, Mom could have used a girl to soften our home a bit, perhaps. Mom’s affection for us was obvious as she always, until this day, wanted to know every detail of our lives. In her later and twilight years, Mom became a living book relaying the life stories of her boys to anyone nearby - friend or stranger. In her eyes we could do no wrong, though we sometimes did.

Lastly, Mom loved her grandchildren - all 22 grandchildren, and 16 great-grandchildren. The saddest day of all was the day her grandson Michael, 6, passed away. Along with oldest son Mike (Debbie), the scars remained. Some of the grandkids lived close, some not so close. Mom and Dad wore out several motorhomes traveling to see them all.

Finally, it must be said that Mom, along with Dad, loved Eureka. For 72 years they both enjoyed love returned from this community. We boys are grateful to have shared in that love of this community.

Maxine was preceded in death by seven of her siblings, and by her grandson Michael. She is survived by her husband Wayne Maples, her five sons - Michael (Debbie), Bruce (Linda), Rodney (Sonja), Roger (Janice) and Dale (Jillaine) - and by her brother Wilfred Friesen, and lastly by her 21 grandchildren and 16 great-grandchildren.

Special thanks to Lorraine Sylvia and Rosanna Bruhnke who lovingly cared for Mom, at home, in these last years. Thanks to Hospice for stepping in during the last week and assisting the family for the best care options.

There will be a memorial service for Maxine at the Eureka Nazarene Church (2039 E Street) on May 8, at 2 p.m. The adjoining Redwood Christian School gymnasium will be employed to facilitate appropriate social distancing.

Plant a tree in memory of Maxine by clicking here.
To send flowers to Maxine's family, please visit our floral store.

Plant a tree in memory of Maxine
An environmentally-friendly option

Plant a tree in memory of Maxine

1 tree planted in memory of Maxine

A Memorial Tree was planted for Maxine M. Maples

Plant a tree in memory of Maxine