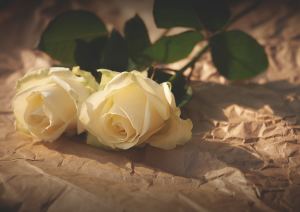 By the Grace of God, Olga Day went to be with our Lord on April 29, 2022 at 7:50 p.m. She was surrounded by her loved ones as she took her last breath. She patiently waited for two of her sisters to arrive to say their last goodbyes. Olga battled with Parkinson’s for many years.

Olga was born April 1, 1936 in Mulatos, Sonora, México to Abelardo Smith and Dolores Cota de Smith. She was the first of nine children. There was one brother and seven sisters. She spent most of her early life living in Guaymas, Sonora, México. She was her mother’s right hand. She began working at an early age to help support her siblings. She worked her way up at the Mercado Zaragoza in the jewelry and fragrance department. This was where she met her future husband, Charles Day.

Olga and Charles had a very short courtship. To maintain their courtship, Charles visited Olga a few times in Guaymas and also went to see her when she was in Sacramento visiting her sister. Charles took Olga on a romantic date to the Opera in San Francisco. It was then they decided on forever. On July 7, 1971, Olga was married to Charles Day in the church Sagrado Corazón de Jesús in Guaymas. Charles then took Olga to Eureka, where they would start their life together.

When Olga married Charles, she became a loving stepmother to two children, Jon Ron and Dianna Dee. Both instantly loved her. A few years later, Olga became a mother to a baby boy, Norman Eric, and a few years later they welcomed a baby girl, April Nicole. Olga gave her family a life rich in culture, tradition and love.

Her love of children spread beyond her own family. Olga had an in-home daycare for 20 years and helped raise and nurture many children. She was so proud of each and every one. It brought her the greatest joy to hear from them and hear how their lives have been. After she retired from her daycare, she focused her love and attention on her grandchildren.

Olga was involved in many activities over the years. She enjoyed participating in several local clubs. Club Latinos Unidos, Latin American Club and the Young Ladies Institute. She was very devoted to her Catholic faith and her Church. She was a volunteer teacher’s aide at Ridgewood Elementary. Through these activities she made many friends over the years that she loved dearly.

Elegance and class, she always stood tall and proud. She was deeply loved by so many. Her smile would brighten anyone’s day. She was gracious and beautiful until the end. The world was truly blessed when she was born. She was an angel among us. Now our Lord has called her to Heaven where she can smile and watch over us all.

There will be a mass in her memory on Saturday, May 14 at 12 p.m. at the Sacred Heart Church in Eureka. The burial will take place after at the St. Patrick’s Cemetery in Loleta.

To send flowers to the family or plant a tree in memory of Olga, please visit our floral store.